Vatic Note:  I mean truly, DOESN'T ANY POLITICIAN EVER TELL THE TRUTH ANYMORE? This speech given by Netanyahoohoo, was filled, packed with lies.  And they gave him a standing ovation when he told those lies.  Come on, Congress, you can't be that far removed from reality??? Can you?? OR ARE YOU AFRAID?  WE DO HAVE A LOT OF DEAD CONGRESSMEN  IN THE PAST FEW YEARS.   Who controls how and what information you get?   Plausible deniability won't work with the American public anymore, there has been too much lying and covering up. Call and remind the congress that Israel has killed more Americans than all the muslim countries put together.  866-220-0044. So what in the hell are we doing giving this war criminal a standing ovation?  Tell them we are losing another generation of our children and our wealth to fight wars for the Khazars in Israel while their children sit safe and secure in their homes or are out shooting palestinian children for their organs. 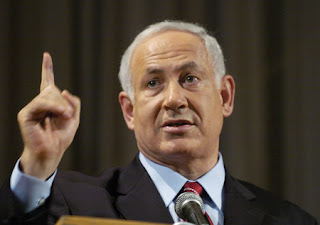 A letter from deputy Director of Jewish Voice for Peace to its membership.. regarding the (VN:  inappropriate) actions of congress (VN: Since when do we give standing ovations to international war criminals and perpetrators of Crimes Against humanity? This is what happens when your country is taken over by those same international criminals and they begin making us behave as they do in their own country).

I was stunned to see that our entire U.S. Congress gave Israeli Prime Minister Bibi Netanyahu 29 standing ovations on Tuesday. Twenty-nine. Unbelievable, given what his speech contained.

The speech that Netanyahu gave that day will go down in history as an extraordinary embarrassment to Americans and Israelis alike. Read on to find out what he said and why we cannot let it go unanswered.

To put it simply, Netanyahu proved yet again that he prefers settlement expansion and Jewish domination of Palestinians to any kind of true peace agreement that would benefit both peoples. He claimed that Israel isn’t occupying anyone—ignoring nearly 44 years of increasingly brutal Israeli control over the lives of millions of Palestinians.

He stated that Israel had no need for American military assistance—ignoring the $3 billion in military equipment and aid the U.S. provides Israel each year. He said Israel supports the desire of Arab peoples to live free—saying nothing about the ongoing Israeli shootings and arrests of Palestinians who nonviolently protest for their right to be free. (1)

What makes this so outrageous is that Netanyahu’s speech found a shockingly sympathetic audience in the U.S. Congress while people like you and me could only watch in disbelief.

I’ve had it. I cannot stand by and watch my member of Congress applaud this man and his litany of distortions, myths and outright fabrications. Please, I urge you to join me in writing your US Representative to say, “How could you? Israeli Prime Minister Netanyahu has shown repeatedly that he is not interested in a viable future for either Palestinians or Israelis and you rewarded him with 29 standing ovations as the world watched.

Here’s a taste of what Netanyahu said, and Jewish Voice for Peace’s debunking of it:  “You don’t need to send American troops to Israel, we defend ourselves.“

Not true. Israel does not defend itself. Israel is historically the number one recipient of US foreign aid. The US gives Israel a whopping $3 billion a year in aid and military equipment, most of which is used to defend Israel’s illegal occupation.

“In Judea and Samaria, the Jewish people are not occupiers.” (Raucous standing ovation.)

Not True. Israel’s nearly 44-year long occupation of Palestinian territories is illegal according to international law. The more than 500,000 Jewish Israelis who have been moved into the West Bank and East Jerusalem since 1967 are settlers who occupy Palestinian land – much of it privately owned by Palestinians and stolen by Jews the rest of it expropriated by the Israeli state – all taken for exclusive Jewish use. (2) This is occupation.   (VN:  heck its occupation here too,  their bankers are taking our land and doing so illegally we now come to find out)

Moreover, “Judea and Samaria” are the biblical terms for that piece of land. Is Bibi suggesting a state based not on secular law but on the Bible? A Jewish theocracy? Is this the Israel that our Congress promotes?

“You don’t need to export democracy to Israel. We’ve already got it.”

Not true. Within Israel, the 20% of Israeli citizens who are Palestinian do have the right to vote and run for office. But they are victims of systematic housing, workplace and resource discrimination. For example, 93% of Israeli land is reserved for Jews.(3)  In the West Bank, more than 2 million Palestinians live under Israeli occupation—that is, their lives are ruled by Israeli military law, while their Jewish settler neighbors are subject to Israeli civil law. Another 1.5 million Gazans live under siege by the Israeli military. Is this democracy?

Not true. The original UN charter that created Israel, as still recognized by the international community, identified Jerusalem as an internationalized zone that must be shared by all parties.

I should say that I’m not really shocked by Netanyahu’s speech. But, I am shocked – shocked, stunned, discouraged, outraged – by the reaction of our elected officials. Clearly, they are not hearing from the growing number of people like you and me who are ready for a change. They won’t stop applauding until we speak up – and speak up loudly.

Rae Abileah is with the advocacy group Code Pink and a member of Young, Jewish, and Proud, the young adult arm of Jewish Voice for Peace. She was physically attacked by some members of the Israel lobby group AIPAC, hospitalized with neck injuries and then arrested after she bravely shouted out the truth during Netanyahu's speech to Congress.(4) The night before, 5 protesters interrupted Netanyahu's AIPAC speech and were similarly assaulted.

Not all of us can put our bodies on the line the way Rae and so many others have. But we can all take action today, by telling our elected officials they must represent us, not the interests of one of the most right-wing and intransigent governments in Israeli history.

P.S. Two of the many Jewish Voice for Peace members in Washington this week were interviewed about AIPAC counter-protests this week. Seventeen year-old Hanna King was on Al Jazeera and Jesse Bacon was on National Public Radio.

References:
(1) Jewish Voice for Peace, "Clouds over freedom in the West Bank."
(2) Btselem, "Taking Control of the Land in the West Bank."
(3) Adalah, "Historical Background."
(4) CNN, In The Arena, "Why Rae Abileah says she disrupted Benjamin Netanyahu Tuesday."


The article is reproduced in accordance with Section 107 of title 17 of the Copyright Law of the United States relating to fair-use and is for the purposes of criticism, comment, news reporting, teaching, scholarship, and research.
Posted by Vatic Master at 5:00 PM

Protestor BEATEN by AIPAC in House Gallery, Arrested in Hospital
Posted By: Steve [Send E-Mail] Date: Wednesday, 25-May-2011 05:17:04
Police arrested CODEPINK peace activist Rae Abileah at the George Washington University Hospital, in Washington DC. Abileah was taken to the hospital after having been assaulted and tackled to the ground, by AIPAC members of the audience in the House Gallery, during Israel Prime Minister Netanyahu’s speech to Congress.
Abileah interrupted Netanyahu with a banner that said “Occupying Land Is Indefensible” and shouting, “No more occupation, stop Israel war crimes, equal rights for Palestinians, occupation is indefensible.” She rose up to speak out just after the Prime Minister talked about the youth around the world rising up for more democracy.
As this 28-year-old Jewish American woman spoke out for the human rights of Palestinians, other members of the audience—wearing badges from the conference of the American-Israel Public Affairs Committee—brutally attacked her. The police then dragged her out of the Gallery and took her to the George Washington University Hospital, where she was being treating for neck and shoulder injuries.“I am in great pain, but this is nothing compared to the pain and suffering that Palestinians go through, on a regular basis,” said Abileah from her hospital bed. “I have been to Gaza and the West Bank, I have seen Palestinians homes bombed and bulldozed, I have talked to mothers whose children have been killed during the invasion of Gaza, I have seen the Jewish-only roads, leading to ever-expanding settlements in the West Bank. This kind of colonial occupation cannot continue. As a Jew and a U.S. citizen, I feel obligated to rise up and speak out against stop these crimes being committed in my name and with my tax dollars.” Abileah explained that she stands in solidarity with the Palestinian and Israeli activists who are routinely jailed and beaten for speaking out for democracy. [more...] http://www.moveoveraipac.org/2011/05/jewish-protester-disrupts-netanyahu-during-congressional-address/
Articles In This Thread:
Protestor BEATEN by AIPAC in House Gallery Arrested in Hospital (views: 464)
Steve -- Wednesday, 25-May-2011 05:17:04 ///
Cream Of The Crop - World's Premier Terrorists Gather Together (views: 344)
Lion -- Wednesday, 25-May-2011 07:35:08 /// FROM
http://www.rumormillnews.com/cgi-bin/forum.cgi?read=205316