The existence of brown dwarf in the solar system confirmed

Vatic Note:   Here is another interesting presentation about our Planet X arrival.  Please read and I highly recommend checking out the other links at the end of this article.   Its worth the read and will hopefully aid us in determining whethere we are dealing with truth here or manipulation once again since the Truth does get buried in with the scam by these international bankers and their minions they pay to fool us and use for false flags especially with HAARP.  The best thing to do is what we are doing, and that is read everything you can on it from legit sources which is hard to determine, but take it all in keeping in mind the end result, which is that these bankers will use such truths to then serve as a foundation for their next scam  such as alien invasions.  We are living in difficult times given the complete lack of trust in any of our normal institutions, so we have to be the final arbiter of our beliefs.   Its a journey and an open mind is the vehicle for traveling that journey.   Good luck.

The existence of brown dwarf in the solar system confirmed

Spanish scientists argue that a brown dwarf has been discovered near Pluto. The celestial object, which astronomers call "G1.9" is said to be almost twice the size of Jupiter and located just behind the dwarf planet Pluto. Is it possible that the rumors about Nibiru or Planet X are about to come true?

The brown dwarf moves in an elliptical orbit between Pluto and the edge of the solar system called the Oort Cloud. It is estimated that the brown dwarf is about 60 to 66 astronomical units AU from Earth (1 AU is the distance from the Earth to the Sun) in the direction of the constellation Sagittarius. Scientists in Spain claim that the newly discovered object is moving in a very flattened ellipse, extending hundreds of AU out of the most distant known planet, and now is closest to the Sun and the Earth as possible. 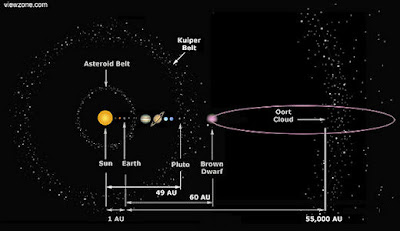 It is worth a closer look at the history of this discovery. It's not like that astronomers have never known about the existence of the object. As early as 1984, Dave Green of the University of Cambridge identified G1.9 as a "supernova remnant." Because the object was very small for a supernova remnant, it was thought that it was young - that is was less than 1000 years old.

But in 2007 as a result of the X-ray observations by the Chandra Space Telescope, it was revealed that the object is 16% greater in weight than previous observations had shown! The Astronomical Observatory's Very Large Array confirmed that since observation of 23 years ago, the object's size has increased significantly. Scientists know that supernovae can not expand so rapidly that it is considered "very young supernova."

Spanish astronomers watched with great interest the object, since it is predicted. Emerging from some time in the Oort Cloud gravity anomalies suggest that these perturbations are caused by a nearby object of considerable weight. There was therefore no surprise to them when there is information about the discovery of G1.9 plus sizes.

Until now, researchers from NASA and observatories known completely ignored by the hypothesis.which the object could be a star or planet. It seems that NASA wanted to thus cut off from matching the image in any way with the theories about Nibiru, Marduk, or Planet X, which in turn are associated with the prophecy of the end of the world 2012 and aliens. Is the recent discovery will change the approach of NASA?

Do G1.9 may be some threat to Earth? Such a potential disaster for the planet we saw in July 2009, when suddenly, despite the efforts of astronomers who monitor this type of dangerous objects, the great comet struck Jupiter. Russian and Spanish astronomers say the comet's flight trajectory was disturbed by G1.9. Even though the Americans claim that G1.9 has already reached its closest position relative to the Earth, we strongly disagree with the Russians, who suggest that NASA So far, "wailed constantly" in his statements on this subject and completely lost all credibility in the discussions on this topic.

I invite you also to:

The existence of the other stars in the solar system confirmed?http://beforeitsnews.com/story/230/629/The_existence_of_brown_dwarf_in_the_solar_system_confirmed.html
http://ubczasopismo.salon24.pl/tajemnice/post/233969,istnienie-drugiej-gwiazdy-w-ukladzie-slonecznym-potwierdzone

I tend to think the planetX problem has passed, ever since I watched Nasim Harramein presenting his fractal theory at The Event Horizon. He showed the audience using photo's from Nasa a large body larger than Jupiter, being blasted away by a solar flare/charge from our sun, which effectively removed it from it's orbit in our solar system. So it's gone and this happened about 2yrs ago if I remember rightly? Whatever, it's gone and this is a big deal but never gets mentioned by anybody?

Anonymous, now that is very very interesting. Do you have a link or anything to that event? I would love to read it if you do. 2 years ago the sun was in the low of its 11 year cycle so I am surprised if it was blasted away by a solar flare from our sun, it would have to have happened in the outer reaches of the system and yet we did not get hit with it.

That doesn't mean it didn't happen but a picture as you suggested would ice it. If I can have a link of the picture and any article associated with it I would definitely put it up here.

If true, then maybe you could speculate why the elite are still in preparation for going underground. Any thoughts on that???

Brilliant, thanks, I will subscribe to you RSS soon!