How far Back Have Global Scientists confirmed Planet X?

Vatic Note: This is up again because we believe it well may be tied into all those resignations we just saw of all the bankers globally.  Are they going underground?   We promised you we were looking into Planet X, otherwise known as Nibiru and have tried to find very recent info and its like a giant blackout... we can find nothing, where we were able to for a few years on a regular basis.  Starting back in 2010 our findings showed a lot with more coming added during the next couple of years and lately, since 9/2011, we have found not one word about Nibiru.  It maybe out there but we are unable to see it. So, we decided to show you it did exist, it was seen and These scientists from Japan found this as far back as 2008.  Very interesting, and also may explain all the underground facilities across the globe that are in place to protect the useless unproductive vampire squid feeders of our society. It may also explain the seed bank in the arctic and the fact that we showed how the work is speeding up in placing every seed on the planet in that bank. So, read it and see for yourself what you think. I am calling on others to provide any info they may find and give it to us for inclusion so we may also get ready for what maybe coming. Remember, this was early on and now we have discovered a tenth planet  bigger than Pluto. 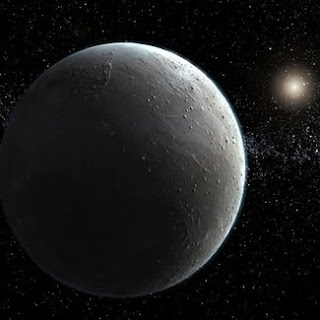 Scientists at a Japanese university said Thursday they believed another planet up to two-thirds the size of the Earth was orbiting in the far reaches of the solar system.

The researchers at Kobe University in western Japan said calculations using computer simulations led them to conclude it was only a matter of time before the mysterious "Planet X" was found.

"Because of the very cold temperature, its surface would be covered with ice, icy ammonia and methane," Kobe University professor Tadashi Mukai, the lead researcher, told AFP.

The study by Mukai and researcher Patryk Lykawka will be published in the April issue of the US-based Astronomical Journal.

"The possibility is high that a yet unknown, planet-class celestial body, measuring 30 percent to 70 percent of the Earth's mass, exists in the outer edges of the solar system," said a summary of the research released by Kobe University.

"If research is conducted on a wide scale, the planet is likely to be discovered in less than 10 years," it said.
Planet X -- so called by scientists as it is yet unfound -- would have an oblong elliptical solar orbit and circle the sun every thousand years, the team said, estimating its radius was 15 to 26 billion kilometres.

The study comes two years after school textbooks had to be rewritten when Pluto was booted out of the list of planets.

Pluto was discovered by the American astronomer Clyde Tombaugh in 1930 in the so-called Kuiper belt, a chain of icy debris in the outer reaches of the solar system.

In 2006, nearly a decade after Tombaugh's death, the International Astronomical Union ruled the celestial body was merely a dwarf planet in the cluttered Kuiper belt.

The astronomers said Pluto's oblong orbit overlapped with that of Neptune, excluding it from being a planet. It defined the solar system as consisting solely of the classical set of Mercury, Venus, Earth, Mars, Jupiter, Saturn, Uranus and Neptune.

The team noted that more than 1,100 celestial bodies have been found in the outer reaches of the solar system since the mid-1990s.

"But it would be the first time to discover a celestial body of this size, which is much larger than Pluto," Mukai said.  The researchers set up a theoretical model looking at how the remote area of the solar system would have evolved over the past four billion years.  "In coming up with an explanation for the celestial bodies, we thought it would be most natural to assume the existence of a yet unknown planet," Mukai said.

"Based on our hypothesis, we calculated how debris moved over the past four billion years. The result matched the actual movement of the celestial bodies we can observe now," he said.

He was hopeful about research by Kobe University, the University of Hawaii and Taiwan's National Central University.

The article is reproduced in accordance with Section 107 of title 17 of the Copyright Law of the United States relating to fair-use and is for the purposes of criticism, comment, news reporting, teaching, scholarship, and research.
Posted by Vatic at 5:00 AM

Email ThisBlogThis!Share to TwitterShare to FacebookShare to Pinterest
Labels: Science

Thank you for posting this article!! I hadn't seen this one. I am looking forward to more about Planet X or herc (hercolubus). This is a very important issue, one that every other issue hinges on.

Here's a couple of links that you might have not seen yet.

I think it's a good idea to watch Jupiter, our cosmic body guard.

For some further information in this regard. I am offering the following link.
http://www.yowusa.com/planetx/2010/planetx-2010-06a/1.shtml

Thank you Anonymous and Berry, these are all excellent and I am going to put them up and possibly change the schedule to accommodate them. Thanks again.

Thank you Berry for the up-date! :) I will check it out soon. I don't think I've read that one.

And Vatic I am happy that you approve of my links. Glad to help.

Oh and guess what? Today I was sharing some stuff with a FB friend and something dawned on me. There could be a connection to Planet x and the Bilderberg group because this article I was reading recently mentioned the year 2012. Look for yourself..

"The purpose of the group is a World Government by the year 2012 and a global army through the UN. The take-over is partly planned to involve computers." (The Bilderberg Group)

I don't know if you have seen this gentleman, but I believe him. There are 12 segments to watch (each being about 10 minutes long) but what he is saying is so captivating, that the time goes by quickly. To me, it explains a lot about what is going on.....
http://www.youtube.com/watch?v=vpbiuKTtMZo&feature=related

"Huge List of Planet X MAINSTREAM News Reports Dating Back to the 50s!"

Anonymous, thanks for that, I will visit it first chance I get. I could not find anything anywhere since 9-11 which is weird or a coincidence given the date.

Thank you, Anonymous. I clicked on the link you gave, and I'm still watching the video. I took this time out to tell you something I found.
In part 3 of the video, John Moore said the safest place in America would be in the Arkansas/Missouri Ozarks. In part 4, he said that the Vatican Library closed in 2007 and would probably reopen someplace on higher ground. I checked. It has reopened in its old location, BUT I stumbled across the information that the Vatican Film Library (containing microfilms of more than 37,000 works from the Biblioteca Apostolica Vaticana)is in St. Louis Missouri. With further checking, I found that St. Louis is 535 feet above sea level.
It seems that your source is onto something.

Thanks, American Action Report, we do appreciate the extra leg work you have done on this. Will check this all out first chance I get. Wish I had a lot more time.... but I will get there eventually. LOL

Ok, I watched the video and guess what? The floods, earthquakes and global warming have nothing to do with anything..... its haarp and other WMD in space. Its a way to cut off one part of the country that is armed from the other part so they can divide and conquor. There is no way the nation united would ever allow globalizing to replace national sovereignty and after the defeat of the North American Highway, this was the only option left to them.