Vatic Note:  This is outstanding and received from Australia, a country heavy into this issue since the planet will be coming from the south and from underneath, so they are much more involved with this and open about what they are finding.   Its well worth the read and please,  I beg you, watch everyone of these videos.  Its been a long time since anyone official or professional in this country of ours, has  produced something so educational as the alternative US presses have done here,  that you can feel just how deprived we have become of good and real information about our world around us.   Notice how they openly tell everyone what is going on and that some will be saved and others will have to shift for themselves and even discuss ways people not designated for saving will have to do that on their own.  They hold nothing back.  Very good piece in two parts.  Told ya we were going to follow up on this and I am glad we did.  . 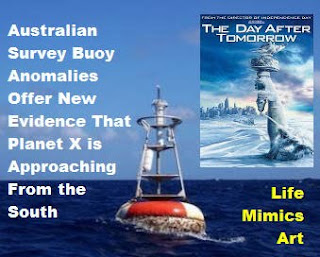 A heated debate in the Planet X community focuses on where Planet X is approaching from. Many believe it is near or moving along the ecliptic in the direction of the sun (the plane of our solar system.)

Others such as ourselves, have always maintained that it is approaching from the South.

Those who believe it is moving near or along the ecliptic in the direction of the sun, offer in evidence, cell phone photos and spurious SOHO image anomalies.

Our position has always been that this dubious imagery misses one simple point. If so, Planet X which most likely has its own magnetic field, would already be interacting violently with our sun, which is at this time so quiescent, that NASA even said that it is the “quiet before the storm.”

On the other hand, the only evidence that NASA is interacting with our Sun is found in the data reported by the ESA-NASA Ulysses Probe. 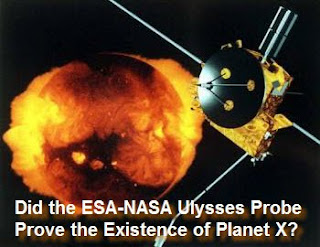 The published findings of the 2007, ESA-NASA Ulysses robotic probe's look-up fly-under of the Sun's South Pole region came to our attention while authoring our book, Planet X Forecast and 2012 Survival Guide in 2007.

It offered the first half of a picture that would either provide proof of, or call into question, the existence of Planet X. A possible acid test, so to speak. However, the second half of this picture would not arrive until 2008, during the probe's scheduled look-down fly-over of the Sun's North Pole region.

The last polar flyover of the probe was “officially” unsuccessful though European sources indicate otherwise. Nonetheless, the data NASA did publish clearly shows that the Southern hemisphere of the sun is significantly more active than the Northern hemisphere, which supports the argument that Planet X is currently approaching the core of our system from deep within the Southern skies of our solar system.

Published in 2008, these findings are now supported by new findings that not only corroborates the Ulysses probe findings, but also suggests a causality link between recent Earth changes, seismic events, volcanism and even the BP oil spill and the approach of Planet X from the South.

If the earth is subject to a gravitational pull from below the ecliptic (from the South Pole), this would theoretically make the South Pole "inflate out" (ocean and continent rising) and the North Pole crustal layers slide and stretch from one to another (mantle stretching and following the earth's circumference path.) 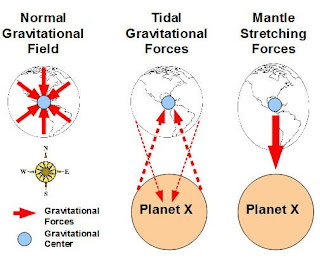 If this is true, it would lead to unusual weather and other types of anomalous patterns, such as unexpected tidal behavior.

Have scientists noticed such phenomena? The answer, here again, is a very resounding yes! Scientists from different parts of the world have recently verified these occurrences. 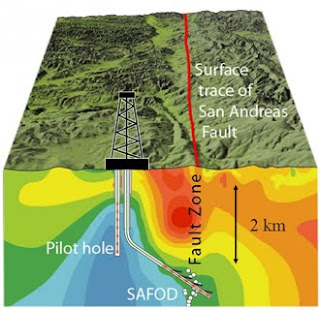 The subtle changes in stress caused by tides in Earth’s crust can trigger small, deep quakes along a seismically active portion of California’s San Andreas fault, a new analysis suggests.

The same forces of attraction that cause ocean tides also cause tides in Earth’s rocks, says Amanda Thomas, a seismologist at the University of California, Berkeley. And although the continual variations in rock stress associated with those tides are minuscule, they apparently are big enough to trigger small tremors along some faults, Thomas and Berkeley colleagues Robert M. Nadeau and Roland Bürgmann report in the Dec. 24/31 Nature.

This 2009 article documents the new discovery that tides are not just ocean events, but crustal as well. This discovery likewise highlights the current risk of a major quake for the greater Los Angeles area.

YOWUSA.COM, 25-May-10
2010 Quake Prediction for the Greater Los Angeles Area 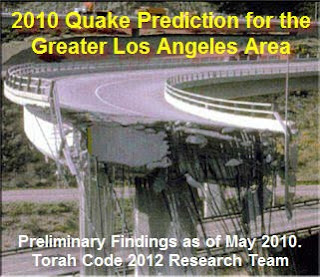 2010 Quake Prediction for the Greater Los Angeles AreaFor those of you living in the greater Los Angeles, CA area, an immediate and prudent review your earthquake preparedness measures is strongly advised.

This article presents late-breaking Torah Codes by film producer and research Richard Shaw, with the permission of the research team in Jerusalem. Please note, this is not a call to panic. It is a call for diligent concern and responsible action.

Is this new potential threat of a major seismic event in Southern California related to the BP oil spill that is now devastating multiple ecosystems along the Gulf Coast and beyond? Perhaps so, assuming there is a single common causality as described in the video, Planet X Special Report No. 01: Where is Planet X?.

8 Scenarios for our Planet when Nibiru arrives

The Science behind the existance of Planet X

If you have not already viewed this video, you might want to do so now as it will help put the new data in this report (Part II) into a more perceptive context.


Then as you read the following analysis of the Australian survey buoy anomalies, you may begin to see a correlation between Earth changes and the BP oil spill and worse.

Perhaps this, more than the spill itself, motivated President Obama has placed a moratorium on deep water drilling in the Gulf.

Why? Because a part of planet that we know less about than the face of the Moon is changing and these changes are startlingly evident in Australia.
(see Part II in a continuation of Planet X)

Any reference to what may or may not happen as a result of planetary invasion should factor in the information contained at: http://www.youtube.com/watch?v=SlhhXQBlpcQ

Thanks and I will check out that video and if need be, will do a post/blog on it. Do you know of any connection scientifically between the arrival of Planet X and these sink holes that are showing up all over the planet???