Vatic Note:   This is the man hired by Homeland security, so what he is describing is a continuing operation for HLS through TSA sexual criminal assault, FEMA camps,  Unemployment,  loss of retirement, etc etc.   This is what he is doing and we are the citizens of Russia in 1917 and Germany in 1934......  now we know why they did not fight back.  There was no visible enemy, everything was done behind the curtain.... waiting for Toto to pull it back so everyone can see.

Then the protocols tell us what they will do once we reach this stage of demoralization.  Also remember who conducted, funded and controlled the Russian revolution?  The same people who wrote the protocols and ran Russia into the ground for 70 years afterwards.  That is why they brought this man here to work as head of operations for Homeland security.  This is a true eye opening disclosure of the planned manipulation, brainwashing etc of masses of humanity and fits very well with the BRITISH/Rothschild tavistock groups funding for research in these fields out of britain.  Remember we gave you a list on this blog of the elite institutitions funded for doing this research and work, which included Harvard, Princeton, Yale, MIT, NHI, Stanford,  etc
Source:   A 1980's interview with Yuri Bezmenov, Khazar KGB defector and expert in propaganda

Demoralization is Weapon in Secret War-- KGB Defector
By Toby Moreland, Provided to Vatic project by Jim Kirwan, contributor,  (VN:  He is probably not a defector, rather just a change of duty station.  Remember, the international bankers still run Russia, so if he is here and still alive... its all part of the game.  He is suppose to be here and do for the bankers what he did for them in Russia.   Soon we will all be globalized exactly the way he says on here..... nice world run by truly insane people). 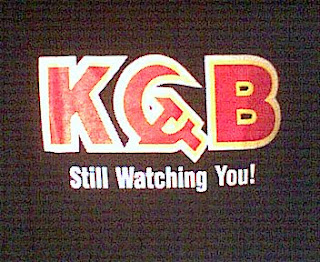 The Soviet Union was a front for the alliance between international bankers and the British Empire. Marxist-Leninist ideology is illegitimate to the core; it is a tool used in the process of "ideological subversion," a method of weakening independent nations and ultimately turning them into socialist "democracies" under internationalist control."

In a 1980's interview with G. Edward Griffin, Yuri Bezmenov, KGB defector and expert in propaganda, said the subversion methods employed in the U.S. by the KGB were designed to "change the perception of reality of every American to such an extent that - despite the abundance of information - no one is able to come to sensible conclusions in the interest of defending themselves, their families, their community, and their country."

This multi-stage process requires media complicity/mediocrity, control of educational policy, widespread corruption in politics and industry, and the unlimited money/credit of the international bankers who funded and controlled the USSR.   (VN:  Please pay attention when he talks about the results on the population of the brainwashing and mind control..... HE IS SMIRKING, basically laughing at that point.  AND HE WORKS FOR US?)

Scrupulous and influential opponents are discredited, threatened or murdered. It goes very slowly, and its purpose is to eventually bring the target nation to total collapse, when efficient shifts of power structure and economy can take place.

It is important to understand that the goal of ideological subversion is NOT to convert everyone to the left. Leftist ideology must only be presented as a legitimate alternative for the subversion to be successful. The Hegelian dialectic does the rest, and when the economic structure deteriorates within the target nation, the subverted population - divided, dumbed down, short-sighted and reactive - will beg for the expansion of government programs.

According to Bezmenov, the first stage of this process - demoralization - usually takes 15 to 20 years because this is the amount of time it takes to educate a single generation of students. In the United States, the super-patsy, this process has continued uninterrupted for at least 50 years. It has been applied in any area of society where public opinion is formulated.

Bezmenov said that about 80-85% of the KGB's resources, money, and manpower went toward this subversion process. They recruited journalists, filmmakers, actors, musicians, activists, etc. He said many KGB agents were exchange students.

Here are a few examples of application from Bezmenov's lecture in Los Angeles in 1983:

Religion - "Destroy it. Ridicule it. Replace it with various sex cults which bring people's attention, faith - whether it is naive or primitive - it doesn't really matter. As long as the basically accepted religious dogma is slowly eroded and people are divorced from the Supreme Being. Replace accepted, respected religious organizations with fake organizations. Distract people's attention from the real faith, and attract them to various different faiths." (without any unifying philosophy, important discussions are held exclusively in the realm of humanistic materialism, which clearly favors the central bankers and is always subject to change at their whim.)

Education - "Distract them from learning something which is constructive, pragmatic, efficient. Instead of mathematics, physics, foreign languages, chemistry...teach them history of urban warfare, natural foods, home economy, your sexuality...anything. As long as it takes you away..." (U.S. students rank near the bottom of developed nations in math and science testing, despite having spent more money per pupil than any other nation. See Charlotte Iserbyt's The Deliberate Dumbing Down of America)

Social Life - "Replace traditionally established institutions and organizations with fake organizations. Take away the initiative from people. Take away the responsibility from naturally established links between individuals, groups of individuals, and society at large, and replace them with artificially, bureaucratically controlled bodies...the main concern of social workers is not your family, not you, not social relations between groups of people. The main concern is to get their paycheck from the government. What will be the result of their social work doesn't really matter." (i.e Replacing individual accountability with bureaucratic bodies that are not held accountable, ...this is the Soviet council form of government.)

Media - "Who elected them? How come they have almost monopolistic power over your mind? They can rape your mind. But how come they have the nerve to decide what is good and what is bad for the ELECTED - by you - president and his administration. Who the hell are they? Spiro Agnew, who was hated by the liberal left, called them 'a bunch of enfeebled snobs,' and that's exactly what they are. They think they know. They don't."

Feminism - "I don't know how you feel about feminism. I don't think that to be equal with men you have to politicize your movement. You cannot legislate equality; you have to BE equal. But that distracts your mind from real issues: family, loyalty, and moral foundations."

In a nut shell, this process destroys, weakens, or simply replaces any existing organizations and institutions that work for the nation's own interests. Sane individuals with a sense of history understand that people in power cannot be trusted, hence the checks, balances, limitations and unalienable individual rights provided by our Constitution. A belief in Marxist-Leninist ideology (state tyranny) requires a child-like hope for benevolent dictators that care about the interests of everyone. History shows that these are disposable mouthpieces of world government.

Co-founder of the World Federation for Mental Health and friend of UN Charter author and Soviet spy Alger Hiss, Dr. Brock Chisholm, nailed it when he said, "To achieve world government, it is necessary to remove from the minds of men their individualism, loyalty to family traditions, and religious dogmas..."

If We Had A Choice

Bezmenov concluded his lecture with a powerful message. The answer to subversion is "bringing society back to religion. Something that you cannot touch and eat and put on yourself. But something that rules society and makes it move, and preserves it."

This all relates to a great lie about religion that has been carefully instilled in most: that some individuals need religion. They've got it backwards. Societies NEED religion more than individuals do. If there is not a single, unifying philosophy that all men are under together, then men (or perhaps the spirits they worship) will rule as they see fit. If this is true, and I believe it is, how could the Creator (if he exists) prove his existence and mankind's purpose in a more effective way? History seems to prove we have a choice: be ruled by the laws of God, or subject to the claws of Man.

Y.B. lecture of the process of ideological subversion Part 1: http://www.youtube.com/watch?v=JN0By0xbst8


The article is reproduced in accordance with Section 107 of title 17 of the Copyright Law of the United States relating to fair-use and is for the purposes of criticism, comment, news reporting, teaching, scholarship, and research.
Posted by Vatic at 1:30 AM

Yuri Bezmenov works for homeland security? According to wikipedia, he died around 1997. Can you please verify?

Yeah, I am sorry, I normally go back to my archive articles to confirm names, Here is who is the one I was talking about, which is even worse because there are more than one and this one was even higher up in the Soviet system. Here is whose name I thought was above.

......former Russian Premier and head of the KGB (the secret police of the former Soviet Union), Gen. Yevgeni Primakov, has been hired as a consultant by the Department of Homeland Security.

...Born in 1929 in Kiev, Ukraine, then part of the Soviet Union. Was raised in Tbilisi, the capitol of Soviet Georgia. His parents were Jews. As a young man he changed his name to Primakov from Finkelstein. He attended Moscow's Institute of Oriental Studies.]

The KGB is still watching us. So is the CIA, NSA, FBI, DIA, ATF and dozens of other acronyms. There is no such thing as privacy.

Thomas Retterbush, sorry for the delay in responding, but as you may know we have been under serious attack for about 2 months now, and we are only just getting back on our feet, so bear with us until we are fully functional again.

As to your comment, you are right about no privacy, but that does not mean we should not scream bloody murder about it everytime we see it.

I usually give them the middle finger like this.....nlm.... and it lets them know we do not intend to stop, nor do they scare us, nor do we care what they do, in fact it simply makes us "justifiably angry". Righteous anger is the first step to action.